The Mayor of Los Angeles is the Chief Executive Officer of the City.  He is elected for a four year term and limited to serving no more than two terms.  Under the city charter, the office is non-partisan, though candidate party affiliations are normally made public in elections. 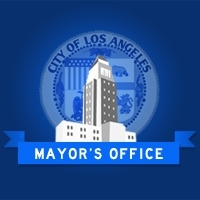 The mayor has an office in the Los Angeles City Hall and resides at the Mayor’s Mansion Getty House, Windsor Square in Hancock Park.

Los Angeles has a strong mayor council form of government, giving the mayor the position of chief executive of the city. The city does not have a city manager and as a result, the mayor truly is the one responsible, much like a President or Governor, for the success of the city. The mayor is given the authority to appoint general managers and commissioners, remove officials from city posts, and is required to propose a budget each year. Most of the Mayor’s appointments and proposals are subject to approval by the City Council, but the Mayor has the power of veto or approval of City Council legislation.

The organization of the Mayor’s Office changes with administration, but is almost always governed by a chief of staff, deputy chief of staff, director of communications, and several deputy mayors. Each Mayor also organizes his office into different offices, usually containing the Los Angeles Housing Team, Los Angeles Business Team, International Trade Office, Mayor’s Volunteer Corps, and Office of Immigrant Affairs, among other divisions.

In the case of an office vacancy, the City Council has a choice to appoint a new mayor or to hold a Special election. The office of the Mayor is also subject to recall in the same manner that he was elected.