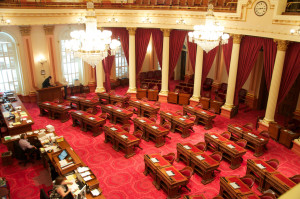 Prior to 1968, state senate districts were restricted such that one county could only hold at most one seat. This led to the situation of Los Angeles County, with 6 million residents as of 1968, receiving 600 times less representation than residents of Alpine County and Calaveras County, some of California’s least populous counties. The federal Reynolds v. Sims decision by the United States Supreme Court compelled all states to draw up districts with equal populations. As such, boundaries were changed such that equal representation was provided.

[1] ex officio: By virtue of office or position; ‘by right of office’. Often used when someone holds one position by virtue of holding another. A common misconception is that ex officio members of a committee or congress may not vote, but this is not guaranteed by that title.