The chief function of Congress is the making of laws.

The legislative process is comprised of a number of steps. To help you understand the information and how it interrelates, a very brief overview of the legislative process within the House of Representatives is presented below. There are many aspects and variations of the process which are not addressed here. Forms of Congressional Action 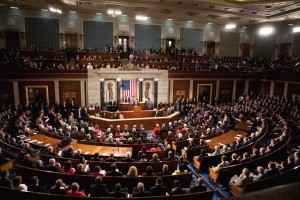 The work of Congress is initiated by the introduction of a proposal in one of four principal forms: the bill, the joint resolution, the concurrent resolution, and the simple resolution.

Introduction and Referral to Committee

Any Member in the House of Representatives may introduce a bill at any time while the House is in session by simply placing it in the “hopper” provided for the purpose at the side of the Clerk’s desk in the House Chamber. The sponsor’s signature must appear on the bill. A public bill may have an unlimited number of co-sponsoring Members. The bill is assigned its legislative number by the Clerk and referred to the appropriate committee by the Speaker, with the assistance of the Parliamentarian. The bill is then printed in its introduced form.

An important phase of the legislative process is the action taken by committees. It is during committee action that the most intense consideration is given to the proposed measures; this is also the time when the people are given their opportunity to be heard. Each piece of legislation is referred to the committee that has jurisdiction over the area affected by the measure.

Public Hearings and Markup Sessions
Usually the first step in this process is a public hearing, where the committee members hear witnesses representing various viewpoints on the measure. Each committee makes public the date, place and subject of any hearing it conducts. The Committee Meetings scheduled for today are available along with other House Schedules . Public announcements are also published in the Daily Digest portion of the Congressional Record.A transcript of the testimony taken at a hearing is made available for inspection in the committee office, and frequently the complete transcript is printed and distributed by the committee.

After hearings are completed, the bill is considered in a session that is popularly known as the “mark-up” session. Members of the committee study the viewpoints presented in detail. Amendments may be offered to the bill, and the committee members vote to accept or reject these changes.

This process can take place at either the subcommittee level or the full committee level, or at both. Hearings and markup sessions are status steps noted in the Legislative Action portion of Bill Status.

Committee Action
At the conclusion of deliberation, a vote of committee or subcommittee Members is taken to determine what action to take on the measure. It can be reported, with or without amendment, or tabled, which means no further action on it will occur. If the committee has approved extensive amendments, they may decide to report a new bill incorporating all the amendments. This is known as a “clean bill,” which will have a new number. Votes in committee can be found in Committee Votes.If the committee votes to report a bill, the Committee Report is written. This report describes the purpose and scope of the measure and the reasons for recommended approval. House Report numbers are prefixed with “H.Rpt.” and then a number indicating the Congress (currently 107).

Consideration of a measure by the full House can be a simple or very complex operation. In general a measure is ready for consideration by the full House after it has been reported by a committee. Under certain circumstances, it may be brought to the Floor directly.
The consideration of a measure may be governed by a “rule.” A rule is itself a simple resolution, which must be passed by the House, that sets out the particulars of debate for a specific bill—how much time will allowed for debate, whether amendments can be offered, and other matters.

Debate time for a measure is normally divided between proponents and opponents. Each side yields time to those Members who wish to speak on the bill. When amendments are offered, these are also debated and voted upon. If the House is in session today, you can see a summary of Current House Floor Proceedings .

After all debate is concluded and amendments decided upon, the House is ready to vote on final passage. In some cases, a vote to “recommit” the bill to committee is requested. This is usually an effort by opponents to change some portion or table the measure. If the attempt to recommit fails, a vote on final passage is ordered.

After a measure passes in the House, it goes to the Senate for consideration. A bill must pass both bodies in the same form before it can be presented to the President for signature into law.
If the Senate changes the language of the measure, it must return to the House for concurrence or additional changes. This back-and-forth negotiation may occur on the House floor, with the House accepting or rejecting Senate amendments or complete Senate text. Often a conference committee will be appointed with both House and Senate members. This group will resolve the differences in committee and report the identical measure back to both bodies for a vote. Conference committees also issue reports outlining the final version of the bill.

Votes on final passage, as well as all other votes in the House, may be taken by the electronic voting system which registers each individual Member’s response. These votes are referred to as Yea/Nay votes or recorded votes, and are available in House Votes by Bill number, roll call vote number or words describing the reason for the vote.

Votes in the House may also be by voice vote, and no record of individual responses is available.
After a measure has been passed in identical form by both the House and Senate, it is considered “enrolled.” It is sent to the President who may sign the measure into law, veto it and return it to Congress, let it become law without signature, or at the end of a session, pocket-veto it.