The California State Assembly is the lower house of the California State Legislature. There are 80 members in the Assembly, representing an approximately equal number of constituents, with each district having a population of at least 420,000. Due to the state’s large population and relatively small legislature, the Assembly has the largest population per representative ratio of any lower house legislature in the United States; only the federal U.S. House of Representatives has a larger ratio. Since a referendum in 1990, members of the 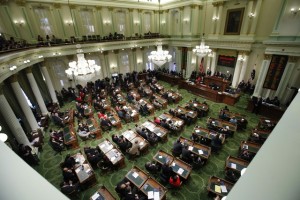 The Assembly convenes at the California State Capitol in Sacramento.

Leadership of the Assembly

The Speaker of the Assembly presides over the Assembly in the chief leadership position, controlling the flow of legislation and committee assignments. The Speaker is elected by the majority party caucus, followed by confirmation of the full Assembly on passage of a floor vote. Other Assembly leaders, such as the majority and minority leaders, are elected by their respective party caucuses according to each party’s strength in the chamber.