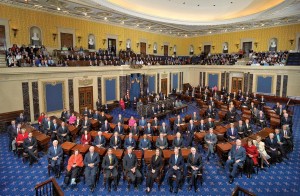 Another difference involves the length of time a Senator and a Representative are permitted to serve. A Senator represents his or her state for a six-year term. A Representative, on the other hand, serves for a two-year term.

Representatives have some unique responsibilities from which Senators are excluded. United States Representatives are responsible for choosing the President in the event that the Electoral College is unable to provide a decision. Representatives are also expected to vote on whether or not to begin the impeachment process. A Senator, on the other hand, may be called on to vote for a Vice President if the electoral vote is tied. A Senator also has the power to vote to approve treaties and it is the Senate that holds trials for impeached public officials.